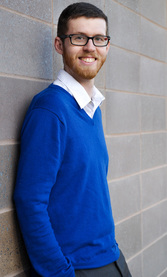 Canadian pianist Brendan Jacklin is currently based out of Nashville TN. He is an active performer, teacher, new music advocate, and adjudicator.  His performing repertoire runs the gamut of the classical genre, including commissions from both local and international composers. A special interest of his involves performing interdisciplinary and multimedia music, having performed works that include visual and electronic elements, as well as performances with spoken poetry and dance.  He has performed both solo and chamber recitals throughout both North America and Europe.

As an avid performer of contemporary music, Brendan has premiered dozens of works, including solo, and works with Fringe Logic Performing Collective, the Atiragram Quartet, the Bowling Green State University New Music Ensemble, and the Brandon University New Music Ensemble. He has worked with many composers, including David Lang, Missy Mazzoli, Libby Larsen, John Orfe, Jorge Cordoba, and Nicole Lizée.  He has also collaborated with many student composers at the University of Michigan, CCM, BGSU, and BU.

Outside of performing, Brendan has published articles and presented posters and sessions on many diverse topics, from incorporating multimedia into the private studio (AMT Journal, co-written with Dr. Courtney Crappell and Clinton Pratt), examining differences in editions of Chopin's works, and how teaching both extended techniques and Baroque ornamentation.  He is currently adjunct piano professor at Martin Methodist College in Pulaski TN, and adjunct instructor at Belmont University in Nashville TN. Previously, he taught at the Flint Institute of Music, and was Head Graduate Assistant with the Secondary Piano Department at the University of Cincinnati and served as the president of the student chapter of the Music Teachers National Association at CCM.

Brendan completed his doctoral studies at the University of Cincinnati's College-Conservatory of Music with Prof. Awadagin Pratt and Dr. Michelle Conda, with cognates in both pedagogy and multimedia music.  He completed his Masters of Music in Piano Performance at Bowling Green State University with Dr. Thomas Rosenkranz and visiting professor Robert Shannon, and completed his Bachelors of Music in Piano Performance with Prof. Megumi Masaki, with minors in cello with Dr. Leanne Zacharias and history.